33 Watch: Archangel Michael, the 80s and the Bible 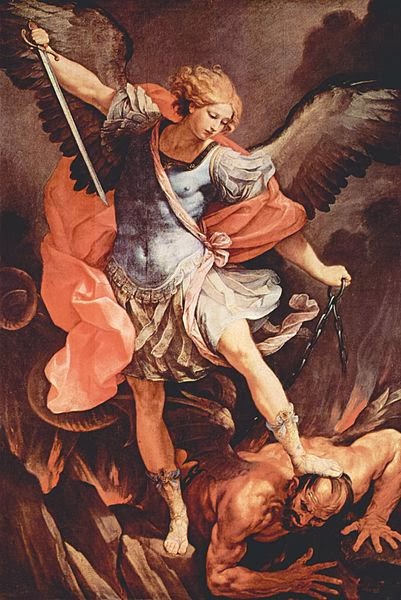 In the Bible, the name Michael is used three times in the Old Testament, and once in the New Testament, in the Book of Revelation.  Before we get into those passages, let us examine the Gematria of the name Michael, and see how that connects with Jesus Christ.
So would these 33s seem to be all a coincidence, or part of something deeper and more meaningful that is never clearly expressed in the Bible?  Let us examine the Hebrew meaning of the name Michael; let us also keep in mind that these same Hebrew people practiced Gematria, that is coding numbers into words, names and phrases; and they also wrote the Bible.

Hebrew meaning of Michael:
From the Hebrew name מִיכָאֵל (Mikha'el) meaning "who is like God?". This is a rhetorical question, implying no person is like God. Michael is one of the seven archangels in Hebrew tradition and the only one identified as an archangel in the Bible. In the Book of Revelation in the NT he is portrayed as the leader of heaven's armies, and thus is considered the patron saint of soldiers.


In the Old Testament, Michael is mentioned three times, all in the book of Daniel.  The Old Testament is what the Jewish faith goes by, in part.
In the Old Testament it is clear, Michael is someone of high esteem and importance.  He is even referred to as the "reader's prince".  In the New Testament, which the Christians follow, the name Michael earns all the same respect in the final book of the Bible, Revelation.  In Revelation, Michael is said to be the angel who lead the armies of heaven against Satan and cast Satan from hell back to earth.  What the passage reveals is that Michael was a leader in heaven, and deserved to be called by name.  This is especially interesting since at no other point in the New Testament is he ever mentioned.

Revelation 12:7-9 KJV:
7 And there was war in heaven: Michael and his angels fought against the dragon; and the dragon fought and his angels, 8 And prevailed not; neither was their place found any more in heaven.

9 And the great dragon was cast out, that old serpent, called the Devil, and Satan, which deceiveth the whole world: he was cast out into the earth, and his angels were cast out with him.

Michael in the 80s
Does anyone remember the name Michael in the 80s?  The biggest stars in the world, from music, to Hollywood, to sports, were often named Michael.  On the Chicago Bulls there was Michael Jordan, who wore the number 23, and who had the initials MJ, that also summed to 23.  There was Mike Tyson, who not only had the name Michael that summed to 33, he had the initials MT that also summed to 33; just like the abbreviation of every montain.  Then there was Michael J. Fox, who had a first name of 33, and a last name that could be decoded as 666; where F is the sixth letter, O is the fifteenth letter (1+5 =6) and X is the twenty-fourth letter (2+4 = 6).  Oh, I almost forgot the biggest Michael of all- Michael Jackson.  Many don't realize he was a 50% owner of Sony music before his mysterious death.  Many also don't realize his character was assassinated because he was actually trying to do good in the world with his wealth.

What I wonder now, looking back, is if any of these Michaels were powered by the numerology of their names?  The number 33 is found to be important across many cultures and religions, and holds some place of spiritual importance for some reason; this much is evident, from Scientology to Christianity and beyond.  Let us close with the question:  Could Michael be the 'angelic' form of Jesus in heaven?
Posted by Zachary K. Hubbard at 6:18 PM