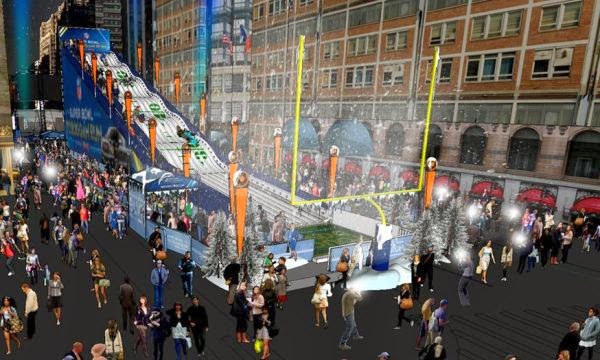 From January 29 through February 1, the NFL will host Super Bowl Boulevard on Broadway, occupying the space from 34th Street to 47th Street.  Very quickly, let us examine the numerology of these streets involved to see if they fit in with terrorism events from the past.  If you're not aware, the powers that be who bring us the horrible acts of terrorism we sometimes endure, from 9/11 to London's 7/7, are obsessed with numerology and synchronizing these events with special numbers.

First, the numerology of the streets
Second, the numerology of the dates
The Super Bowl will be hosted by two states this year, New Jersey, the third state, and New York, the eleventh state.  It will be the first time two states have hosted the Super Bowl.  The Super Bowl will take place directly across the river from the site of where the World Trade Centers were destroyed on September 11.  Within the events of what happened on 9/11, we can extract all the important numbers that are of importance in these Illuminati ritual sacrifices, better known to us as acts of terror.

33
44
311
711
911
In addition to 9/11, there are other numerical signifiances with acts of terror that have been reported throughout the world since.  For example, the Madrid Train Bombings occurred on March 11, 2004, exactly 911 days after 9/11.  For more information on these attacks, as well as the London Bombings, the Sandy Hook Shootings, and Boston Marathon Bombings, please visit the following posts:
If you do not have time to visit the following links, please know that all of these attacks are rooted in the number three-eleven.  What this represents to the occult who are behind this madness is hard to say.  Three-eleven has a Mary and Jesus connection, as well as being the numerical translation of the abbreviation USA.  When multiplied, it also equates to 33.
For this year's Super Bowl, the NFL went out of their way to have two states host the event; the third state and the eleventh state.  Further, it will be the first time the Super Bowl has occurred on February 2, the 33rd day of the year.  Worse yet, this will be the 44th Super Bowl of the modern era, which began when the AFL and NFL merged schedules in 1970.

It was seven years later, in 1977, that on March 11 (3/11) the film was released, Black Sunday.  The movie is about Super Bowl terrorism and the goal of killing all 80,000 people in attendance.  MetLife Stadium finished construction in 2010, and that stadium has a capacity of 80,000 fans.

The numerology truly does align for false flag terror with this year's Super Bowl.  Especially when you consider last year's Super Bowl featured a 33 minute blackout, with 13:22 on the clock.  The number 322 is shown in The Dark Knight Rises as the NFL stadium explodes, killing all the players on the field except for one.
Posted by Zachary K. Hubbard at 9:30 AM