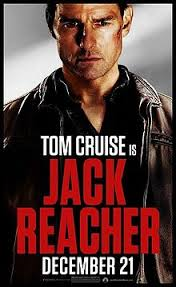 Jack Reacher is a Hollywood movie that debuted on Friday, December 21, 2012.  It stars Tom Cruise, the actor who once wore the number 33 in his movie All the Right Moves and has since divorced three wives, who were all at the age of 33 when the divorces occurred.  This movie further adds more 33s to Tom Cruise's growing resume.

In the opening scene a sniper shoots five people.  He shoots all five of his victims in front of PNC Park, where the Pittsburgh Pirates play baseball.  Let us examine the numerology of PNC.
So, we have a shooter killing people in front of a structure with a numerology of 33, but that isn't where the curious ends.  Just before the shooter begins shooting, the movie shows the time in the right hand corner of the screen.  The time is 2:49 or, 11 until 3.  April 15, 2013- not even four months after the release of this film, there would be a Boston Marathon bombing at the same exact time, 2:49, or 11 until 3.

It gets even better!  The shooter is sniping from across the Allegheny, River.  Let us quickly examine the numerology of this name.
Let me note, my girlfriend picked this movie to watch the other night, and knowing nothing about it, I said to her, "I wonder if this is going to turn out to be a government conspiracy movie with the blatant 33 and 11 until 3 shooting time?" just after the film got underway.  By the end of the movie my suspicions were confirmed.

So ask yourself, with all the blatant placement of 33 and 311 into real life false flag operations, do you think the placement of 33 and 311 into this movie scene is by accident?  Recall that since the first post on this blog, I've been putting forth the theory that the powers that be, the powers who are behind these needless acts of tragedy, are the same people who largely create our films and entertainment, and in part socialize us and condition us with this seemingly harmless and fun entertainment.

*This film was supposed to debut December 14, 2012, the day of the Sandy Hook School shooting.  Because of the shooting, it was delayed one week.  In the Sandy Hook School shooting, it was reported that all victims were shot between three and eleven times.  The medical examiner who made this claim said it was the worst act of violence he had seen in a "third of a century" at this position.  Ask yourself, how long is a third of a century?
Posted by Zachary K. Hubbard at 10:15 PM