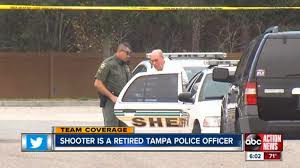 The address of the Theatre is as follows:  6333 Wesley Grove Blvd, in Wesley Chapel, FL.

See anything strange with the address?  This story reminds us of Sandy Hook in the sense that it is unbelievable.  Why would a 71 year old, retired police officer, shoot a Veteran and father who was texting his three year old daughter?  How does that make any sense?  People who know Curtis Reeves, have this to say about him:

"Reeves was a very nice guy, always smiling. I've never seen him angry," Costas said. "Very helpful. If I needed help with something, he was there to help."  Story.

"I thought it just can't be. He's just not that kind of person," said Elnora Brown, who told CNN affiliate WFTS she has been a Reeves family friend for 45 years.

The men were watching Lone Survivor, a war movie that came out January 10, 2014.  Imagine it, two mature men, one a Veteran, the other a retired police, decide to shoot each other, over texting.  I don't buy it.
Posted by Zachary K. Hubbard at 7:27 PM