Dire Wolf to K9: A Lesson In Numerology and Words 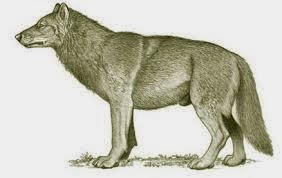 If you've seen HBO's hit show Game of Thrones, you're well aware of the Dire Wolf.  What you might not be aware of, is that the species once roamed the earth mostly in North and South America, up until approximately 10,000 years ago when it became extinct.  Dire Wolf means Canis Dirus, or "fearsome dog".  What you might also finding interesting about this species, is the numerology of its name.

So Dire translates to 9, and Wolf translates to 11.  Combined, we have 9 and 11.  This shouldn't be a surprise, as most of us have come to be familiar with the term "K9" or "canine" for animals of the dog/wolf species.  If it hadn't dawned on you before, the letter K is the eleventh letter in the alphabet, so the term K9 = 119, and the term Dire Wolf = 911.

It makes one wonder, how many of our words are rooted in numbers?  Seeing as how numbers are the one universal language, it makes sense that letters of the alphabet and the words and phrases they form, would be based in numbers, at least in some cases.
Posted by Zachary K. Hubbard at 7:21 PM