The Power of 33: The Portland Trailblazers and the Moda Center 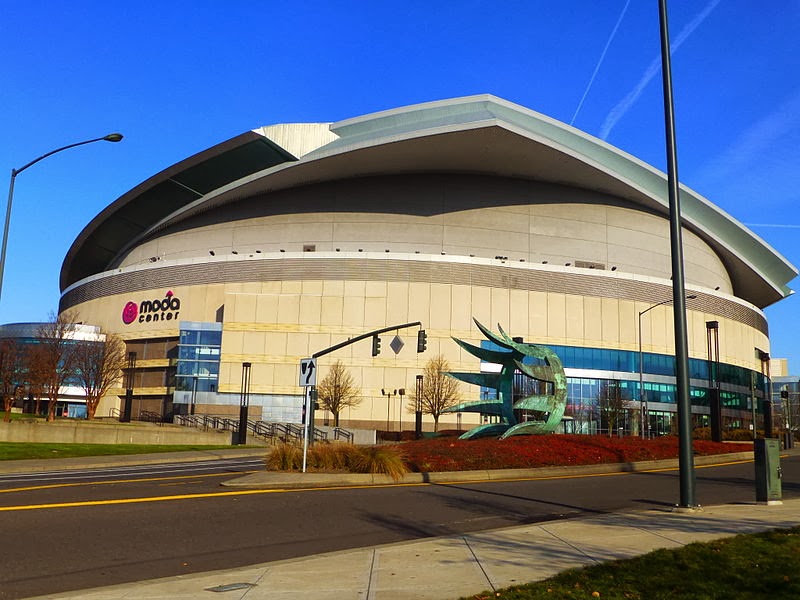 From the time the stadium opened on October 12, 1995, up until just before this year's NBA season, the stadium where the Portland Trailblazers played was known as the "Rose Garden".  For the 2013-14 season however, the name was changed to "Moda Center", being named after an insurance company no one has ever heard of, Moda.  Let us quickly examine the numerology of the name Moda to see if we find anything curious.
Interestingly enough, the Portland Trailblazers won a total of 33 games in the 2012-13 season, the final season in the Rose Garden.  The team also finished with 49 losses.  All things considered, it was a pretty disappointing season for the team and they missed the playoffs by a wide margin.  This season however, has been a tremendous improvement.  This past weekend, they won their 33rd game of the season already, improving their record to 33 wins and 11 losses; competing with other top teams in the league for the best record overall.

It should be noted, Portland is located in the 33rd State, Oregon.  Many people would never notice it, but Oregon's abbreviation also sums to 33.
This post is just food for thought, and a tribute to the city I grew up in.  Go Blazers.

Did you know the Portland Trailblazers closed out the 2013 NBA season with a 13 game losing streak and finished with a 33-49 record, finishing 7th in the Western Conference?

In related 33 Sports News...
Did you know the NFC Championship game came down to a play between two players with direct ties to 33?  That play was between Michael Crabtree and Richard Sherman.  Michael Crabtree, himself, shares the name of the Biblical angel Michael, who has a name in Hebrew meaning, "Who is God"?  Michael has a Gematria of 33.
Sherman, also has some 33 connections.  First, he grew up on the 33rd Parallel, in Compton CA.  Second, his last name has a Gematria of 33.
The odds of having your name sum to 33 are less than two percent.  I wrote this the night before the play happened about Richard Sherman and his game changing ability, and possibly being empowered by 33.  You can read that here.

If you did not see the play, Richard Sherman the Seahawks defensive cornerback leaped into the air, and tipped the ball to Earl Thomas, who intercepted it, securing the win for the Seattle Seahawks, making the Up in Smoke Bowl Complete, Colorado versus Washington.

The Super Bowl will take place on the 33rd day of the year, February 2, 2014.  February 2 is also the birthday of New Amsterdam, the city that later had its name changed to New York when Governor Clinton came to power.  New York is one of two states hosting the Super Bowl this year; this is the first time two states have ever hosted.  This is also a lot of other firsts for this Super Bowl.  New Jersey, and New York, are the third and eleventh states respectively.  What is the multiple of three and elven?