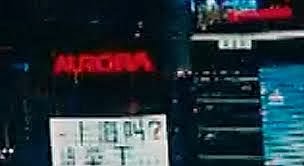 If you weren't previously aware, the latest Batman movie was predictive of real life tragedies to come in Aurora, Colorado and Newton, Connecticut.  First, there was the Aurora Colorado Theatre shooting, which occurred on the premiere night of the Dark Knight Rises.  If you haven't seen the film, in the skyline of Gotham, there is a giant neon orange sign reading AURORA.  Perhaps this sign was just a coincidence, or perhaps not.  What leads me to believe it was not a coincidence is the Sandy Hook connection to the film.

Dating back to the earliest days of the Batman comics, there has been a map of Gotham city, with neighborhoods detailed into the city map.  Since the beginning of Batman, one of those neighborhoods has been called "South Hinkley".  In the latest Batman film however, that neighborhood name was changed to "Sandy Hook".  It begs the question, why the change?  Further, what are the odds of the name change being that of a community that would endure one of the nation's worst school shootings less than six months after the release of the film?  South Hinkley is displayed in the top picture above, and Sandy Hook is displayed in the picture below.  The name wasn't changed until the release of the Dark Knight Rises. 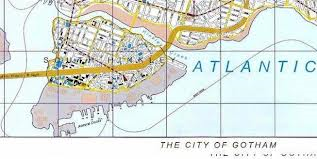 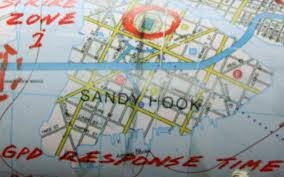 In our culture, we often say that "things come in threes".  If this concept is true of the Dark Knight Rises, it is possible to think that a third event or tragedy might be still to come, as predicted in the film.  Two very memorable scenes from the movie are the destruction of the football stadium during the game, where 322, the number of Yale's Skull and Bones, just down the street from Newton, Connecticut in New Haven, where the Sandy Hook School shooting took place, is shown in the background while players are being blown to bits by bombs on the field.  Another memorable scene is when Batman saves the day by taking the nuclear bomb out of Gotham City limits, to out over the ocean, where it detonates.

This coming Sunday the Super Bowl will be played in New York City, on February 2, the 33rd day of the year.  Five months to the day, September 2, 2013, Senator Lindsey Graham of South Carolina said that the nation might be at risk of having a nuclear bomb detonate in New York or Charleston Harbor.  He was very specific in his destinations for the bomb and it made me wonder why he was so exact in the locations.  Is it possible he knows about a potential false flag and where it might occur?

More recently, since Senator Graham's warning, a viral video has been uploaded onto the web, with coded numbers and two warnings written in cryptic language.  One of the warnings is "Run away".  The other is "NY Water Sector".  The video is titled "Be Ready" and you can watch it below.


Should tragedy occur at this year's Super Bowl, you can already see the narrative for the road ahead.  In addition to the further security measures that will be passed, taking away more liberties from citizens, we can also see more war.  We can also see the building of the legacy for Mr. 322, Mr. 33. Governor Chris Christie of New Jersey.  I'm sure he'll be heralded as a hero in the response to the terror, and his resume will be further bolstered for the most promising candidate as future President of the United States.  If you're reading this and not familiar with the narrative, one only need look back at how George W. Bush and Rudy Guilliani benefitted from the events of September 11 in the national media and with the national public.  Before the attacks, George W. Bush was a lame duck President.  After the attacks, his approval rating and popularity sored.  Sad but true.
Posted by Zachary K. Hubbard at 11:33 PM