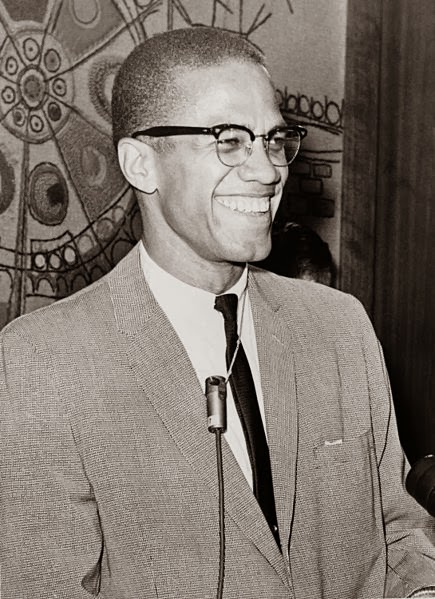 It is believed that Malcolm X was assassinated by three men, on February 21, 1965.  If he was truly assassinated by three men, only one was convicted for the killing.  That man was Thomas Hagan, who was released from prison on Tuesday, April 27, 2010, 44 years after the assassination of Malcolm X.  Thomas Hagan was released at the age of 69, at 11 in the morning, from the Lincoln Correctional Facility located on the corner of West 110th Street and Malcolm X Boulevard.
From Julius Caesar, to William Henry Harrison, to Abe Lincoln, to Joseph Smith, to Martin Luther King Jr., to Pope John I, to the World Trade Center buildings, 44, or 4/4, or April 4, seems much to do with death, destruction and assassination.  With regards to the JFK assassination, it was 44 years after the fact that ABC released details about how the President was nearly killed three weeks before his death in Chicago, Illinois.  Malcolm X's killer being freed 44 years after his slaying fits this same general pattern.

Thomas Hagan's release came after meeting with the Parole Board on March 3, 2010, or 3/3.  Two years later, this would become an important date in black history, as Trayvon Martin was laid to rest on this same date, March 3, 2012.  Thomas Hagan, at the time of the Malcolm X assassination, went by the name Talmadge X.  Let us examine the numerology of the name Talmadge X, to see if he was possibly working in the interest of someone other than the Nation of Islam, who is often accused for being behind the slaying of Malcolm X.
Aside from the numerology, even Thomas Hagan, previously known as Talmadge X, contends that he did not kill Malcolm X for the Nation of Islam.  Today, he says it was the act of an uneducated and ignorant man.  While in prison, he received a degree is sociology and considers himself to be educated, wise and mature.  He is now the father of four children, who he wants to see grow into wise, educated members of society.

Also of interest, is the Spike Lee film Malcolm X, starring Denzel Washington, that was released November 18, 1992.  This film is one of only three films to run 3 hours and 22 minutes in length.  322, of course, is the number associated with Skull and Bones, the elite Yale Secret Society.  Members of Skull and Bones refer to themselves as "Bonesmen", which also has a numerology of 33, like the name Talmadge X.  The numerology of the date of release for the film, is one short of the illuminated 33, but matching that of the first two numbers in 322.
The other two films to run 3 hours and 22 minutes in length are John Wayne's The Alamo, and the Director's Cut of Apocalypse Now.
Posted by Zachary K. Hubbard at 8:55 AM