The 44s in Haunting in Connecticut, predictive of the sequel 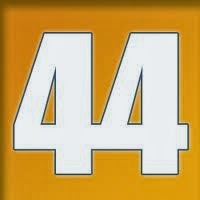 The Haunting in Connecticut was released March 27, 2009.  The numerology of that day is as follows:

What made me suspicious about this movie, is the two deliberate 44s placed in the film.
The premise of the movie is that the main character is dying of cancer, and because he is dying, he can see this world where ghosts realm that others cannot see.  The majority of the film is set in the house baring the house number 44.

As I reported in an earlier blog post, the movie 4:44 The Last Day on Earth was released at the end of 2011 and reviewed in the New York Times on March 22, 2012.  The main actress in that movie was picked because her birthday is April 4.  Further, as I stated in my second post on this blog, I recognized a pattern between 44 and assassination.

Aleister Crowley wrote the book about Occult Magic titled Magick:  Book 4 ABA
Making matters even more interesting, Georgia is the 4th State and has a Gematria of 44.
In the state are the Georgia Guidestones, a mammoth stone creation, with 10 "new commandments" carved in 12 different languages.  The first rule is 'maintain the earth's population at 500 million.'  The Guidestones were placed where they are March 22, 1980.

April 4 in our nation's history is the day the 9th President died while in office.  He was the first President to do so, dying exactly one month into his first term.  Later, April 4 would be the day Martin Luther King Jr. would be assassinated in 1968.  Five years after that, it would be April 4, 1973, the year the World Trade Center buildings opened for the first time.  After the structures collapsed in 2001, the Tribute to Light would be shown into the NYC skyline for 33 nights.  Two massive lights made the tribute; each light was composed of 44 lamps.

The sequel to Haunting of Connecticut, was titled Haunting in Connecticut 2:  Ghosts of Georgia.  Do you think the 44s in the first movie were indicative of what was to come?  If you've never seen other movie, they're both worth the watch.  And in a rare movie feat, I'd say the second movie is actually better than the first, but they're both worth seeing- numerology aside.