This post is not meant to offend, it is only intended to shed light and reveal the truth.  The Boston Marathon Bombings were a false flag terrorist attack in which nobody was hurt.  The blood and gore you witnessed on nightly news casts was no different than that of a Hollywood movie.  Those who were shown with missing limbs already had missing limbs and were "amputee actors" that help train the United States military.  If you would like to see these amputee actors in action, please watch the following video courtesy of CNN.  Once you see how these training drills work, you'll have a much better understanding of what actually happened on April 15, 2013 at the Boston Marathon bombings.


The marathon bombings are reported to have taken place 13 seconds apart, at 2:49 PM EST.  Another way to say this time is 11 'til 3 PM.  In countless blog posts, I have exposed how the numbers three and eleven have been connected to false flag terrorism; from the World Trade Center attack, to the Madrid Train Bombings, to the London Bombings in which the third train to explode was #311, to the nuclear meltdown at Fukushima.  Even in the Sandy Hook shootings, the Chief Medical Examiner stated that every victim was shot between "three and eleven times".  These people who are behind these acts think they're clever, but their tired routine has been exposed by this blog and I want the world to know about it!  We shouldn't have to live in fear of false threats and reports of terror.  If you don't understand why such a false act would be perpetrated, I'll fill you in.

After the marathon attack, Martial Law was declared in Boston and people's homes were raided.  This was a test run for the National Defense Authorization Act, which was first passed New Year's Eve, December 31, 2011, when no one was looking and half the country was celebrating.  The NDAA was recently renewed on December 20, 2013.  If you're not familiar with the Act, it declared the United States an 'active battleground in the war on terrorism where any citizen can be arrested and detained, even assassinated, without warrant, if suspected of being a terrorist agent.'  It has also given the government the right to raid our homes and seize our property if they determine it to be in the interest of 'National Security'.  Of course the discretion of this law is entirely up to the Federal Government, which creates room for significant abuse.  The law is a reminder that the post-9/11 era is nothing like the country we were raised to believe we were living in, that is if you're my age or older (I'm 30 and was a few months removed from high school when September 11, 2001 occurred).  Instead, it is a nation where we are supposed to be fearful of boogiemen and complacent to the loss of liberties while the nation transforms into a police state.

Thirty-three is an important number to the Freemasons and other secret societies, With regards to the World Trade Center Complex, construction began in 1968, the same year 9-1-1 would become the national emergency dialing code.  For those who are mathematically challenged, from 1968 to 2001 is a span of 33 years.  George W. Bush was the President who was in office when the attacks took place.  His birthday is July 6, 1946.  The numerology of his date of birth is as follows, 7+6+1+9+4+6 = 33.  1968 is also the year George W. Bush graduated from college after serving a healthy term in Skull and Bones.  33 years later, he would assume the White House.  If you've ever wondered how this guy became President, aside from being the son of a former President, his birthday is a major qualifier.  George W. Bush also helped shed some light on the truth of the matter regarding the marathon bombings.  Watch the video below to see just what he revealed.  It almost makes me miss the guy!


The attack taking place in Massachusetts, a 33 of its own, is a clue in the truth of the matter.  To elaborate on this point, we will look at two drills which took place in Oregon, the 33rd State, in 2007.  They were drills said to help protect the region from future attacks and/or emergencies.  The drills were titled TOPOFF 4 and NOBLE RESOLVE.  Let us examine the gematria/numerology of these drill names.

So it seems there might be an affixation with the number 33 and false flag terror, as well as anti-terrorism drills, which is what Boston was set to receive in Operation Urban Shield where backpack bombs were to detonate in Boston City causing mass casualties, as an exercise for law enforcement in the region.  It is my belief that Operation Urban Shield is what occurred on April 15, 2013, with one chief problem in that we were not told we were witnessing a drill, instead we were told we were witnessing an act of terrorism.  A track coach, Alastair Stevenson, who was at the Boston Marathon has been outspoken on this issue because he feels that he was misinformed by law enforcement.  Prior to the explosions, he questioned Boston legal about police being located on the tops of buildings and the bomb sniffing dogs in the area.  He suspected something was wrong but was told everything was just fine.


“At the starting line this morning, they had bomb sniffing dogs and the bomb squad out there,” he said. “They kept announcing to runners not to be alarmed, that they were running a training exercise.”"

When you look at the facts, all of the facts, the truth becomes clearer.

Back to the numerology of the ordeal, let us never forget that it took place at 11 'til 3.  If you multiply eleven by three, you get 33.  In the attacks, 3 people were killed, and 264 injured AS REPORTED, not in reality.  The numerology of 264 = 12 = 3.  When you combine the numerology of the killed with the injured, you get 3 and 3, or 33 as well.  Further, if you take the time to watch the countless videos people have uploaded to YouTube, in an effort to expose the truth, you'll see that almost no one is around the detonation area of the bombs, clearly exposing the 264 number to be a COMPLETE MYTH. 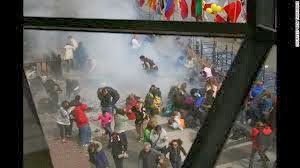 Pictures do not lie.  Look at the cloud of gray, and the standing people.  One person is even running through the epicenter of where the blast took place.  Shouldn't all those people who are standing around be injured, or even dead?  And why would someone be running through the middle of where an explosion just took place?  Typically, people run away from bombs, not towards them.  Fortunately for these people, what exploded, was a Hollywood type explosion, as shown in the amputee actor video above.  For a more detailed video exposing how fake this terrorist attack was, please watch the following videos posted just below.

Making matters even more strange, is where the finish line was selected for the 2013 Boston Marathon.  That address was 666 Boylston St. 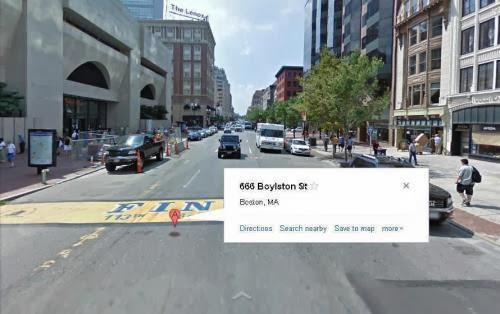 If the attacks were fake, it begs the question, what about the accused?  Let us examine the numerology of their names.

Combined we get 13 and 11, with Dzhokhar Tsarnaev's name equaling 74 before 11.  What is interesting about 74, is that 7 and 4 are the most commonly used numbers in the Book of Revelation and they are also the numbers that represent our nation's birthday on July 4.  If you've never read the Bible, the Book of Revelation is the final book, and the same book where the number 666 is referenced.  To take it a step further, the name Jesus, who was crucified at the age of 33 after performing 33 miracles, has a numerology of 74, just like Dzhokhar.
The purpose of showing you this information is so that you know numerology and gematria has been important in this nation since its inception, and that numerical coding is still practiced today as exposed in numerous other posts in this blog.  As for Tamerlan Tsarnaev's name equating to 13, it is interesting that 13 is also the representation of the Original 13 Colonies.  Between the two names, we have deliberate tributes to Freemasony and the roots of our nation.  Or perhaps it is just a coincidence.

It is my opinion, based on research, that the accused are also actors, in on the plot.  It has been reported that Tamerlan Tsarnaev was arrested before being reported shot and killed in a shootout.  The events surrounding the death of his brother also don't add up.  Making matters even worse, is the bizarre testimony of his aunt and uncle.  Ask yourself, since when do they put the aunts and uncles of terrorists on television?  If you've never seen that footage, it is linked below.  If you don't have the time to watch it, what you'll miss out on is a bunch of senseless jibber-jabber, and the uncle referring to his nephews as "losers".

From blown off legs that don't bleed, to gray puffs of smoke that don't pop nearby balloons or harm plastic fences, to dishonest, bomb-proof cowboys, the Boston Marathon bombings wreak of foul play.  One can only hope that these crimes against humanity, that is the lies that are told by our Federal Government and Mainstream Media, will come to an end, and justice will be served.  Until then, keep your eyes open and don't be fooled by these shenanigans. 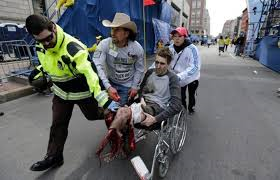 ﻿
Bonus Time
The cowboy hero's real name is Carlos Arredondo.  He is a Costa-Rican citizen who lost one of his sons in the War in Iraq and another to suicide after the death of his brother in combat.  The following video exposes the lies he told in a major way.  If you want definitive proof the Boston Marathon Bombing is a hoax as it has been told, all you need to do is watch this video from start to finish and you'll have no doubts.