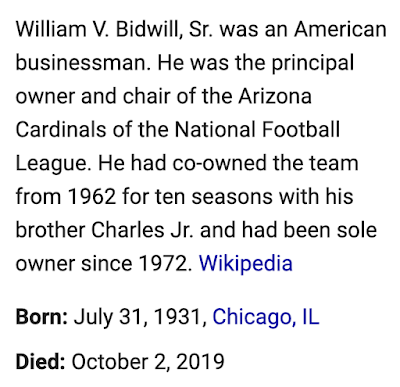 Billl Bidwill, owner of the Cardinals, has died 63-days after his birthday.

Keep in mind the Bidwill family once moved the Chicago Cardinals to St. Louis, before moving them to Arizona.  That reminds, the St. Louis Cardinals baseball team are trying to make it to the 115th World Series...

Bill Bidwell is dead at 88.

And notice how 'Cardinals' fits in with 'baseball' and 'Major League Baseball'.

His death comes 20-days before the start of the World Series, October 22.

And for one last thought, he has died on the opening day of the NHL season that will conclude with the 102nd Stanley Cup.  The local Arizona team is the 'Coyotes'.  Coyotes = 102