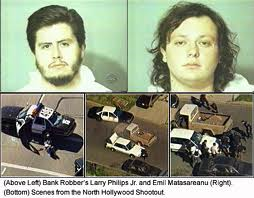 On February 28, 1997, the most televised shootout between cops and bank robbers in the history of television occurred.  The shootout lasted exactly 44 minutes, beginning at 9:17 and ending at 10:01.  The shooters involved were Larry Phillips and Emil Matasareanu.  Let us examine the numerology of these names.
That is a lot of threes, and the last name Matasareanu has a numerology of 33, a number found in nearly every single false flag event.  Another number that is often found, is 311.  In this case, the two men were robbing Bank of America, which has a coded 311 as a symbol.  The Bank of America logo is in fact three-elevens. 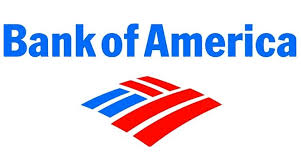 After the shootout, the two men were blamed for a July 20, 1993 bank robbery that took place in Littleton, Colorado- the same town that would later be used for the Columbine School shooting false flag attack.  Let us examine the numerology of Littleton.
It was also later revealed, that the two men had been arrested in Glendale, California for speeding on October 29, 1993.  They were arrested because they had illegal weapons on their persons, as well as armor. They would serve 100 days in jail for this offense.  Let us examine the numerology of Glendale.
On the day of the shooting, the official report states that the two men had 3,300 rounds of ammunition.  I've said it before and I'll say it again; the powers that be, who give us this fake and manipulated news, can't stay away from these numbers.  For further proof, it is reported that they were able to retrieve $303,300 from the bank before trying to make their escape, which would turn into a 44 minute shootout.

The shootout took place in North Hollywood.  Let us examine the numerology of this city.
And last, let us not forget that this shootout was with the police.
Since the event, a film has been made called 44 Minutes: The North Hollywood Shootout.

As a result of this shootout, public legislation was raised and passed helping better arm and protect police officers with equipment and weapons to respond to such an incident in the future.  In other words, this event helped transition police officers from the guys in blue slacks, to the well equipped soldiers we now see on U.S. streets.  Is it possible to think that this shootout was some sort of well managed and planned event to achieve this purpose?  If you read the LA Times articles following the shootout, it is reported that initially there were reports of six robbers, and a manhunt which followed looking for the other men, but which produced no arrests.  These details mirror that of Sandy Hook and other false flag shootings.  Between the 33s, 44 and 311, I'm quite certain this was another well managed media and government hoax; for the purpose of better equipping the police, in the slow and steady building of the United States Police State, aka 33 State.  If you've never seen footage of this shootout, some can be observed in the video below.