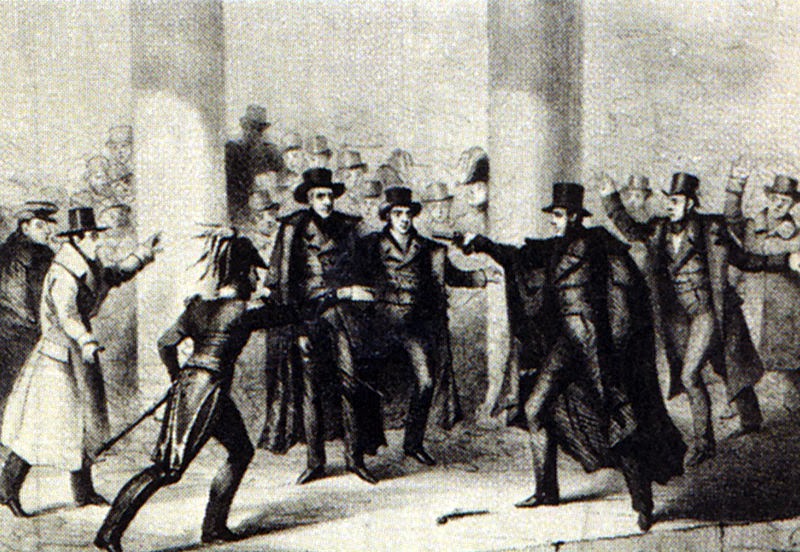 Andrew Jackson was the seventh President, and first to be attacked while in office.  On May 6, 1833, he was laying a cornerstone at the grave of Mary Ball Washington, the mother of the first President, George Washington, in tribute to her name.  Her grave is located in Alexandria, Virginia, where President Andrew Jackson would be attacked.  Let us quickly examine the numerology of Alexandria.
While going through the ceremony, he was attacked by Robert Randolph, a man who Andrew Jackson had personally fired from the Navy for charges of embezzlement.  It is said that Randolph had intended to kill, but came short, only injuring Jackson in the process.  The name Robert has the special numerology of thirty-three.
Less than two years later, on January 30, 1835, Andrew Jackson would survive the assassination attempt of Richard Lawrence, when the two pistols he aimed at Jackson and fired, failed to shoot.
Richard Lawrence would be tackled by David Crockett, and would later admit that he was reincarnated King Richard III, who had come to kill Andrew Jackson so that money could be more plentiful in the nation.  Andrew Jackson of course, is known for squashing the nation's second central bank, which is the modern day equivalent of the Federal Reserve.  Richard Lawrence, was deemed insane and treated in a hospital ward for his perceived mental illness.

Andrew Jackson, prior to becoming the President of the United States, also survived a near death experience from dueling that involved the number 44.  On May 30, 1806, Andrew Jackson and Charles Dickinson engaged in a duel in the town of Adairsville, Kentucky; just on the border of their home state Tennessee, where dueling was outlawed.  It is said that Dickinson got his shot off first, hitting Jackson in the chest.  Jackson however, did not die and staid his ground.  Per the rules of the duel, Jackson was allowed to take aim and shoot before Dickinson could shoot again.  Jackson took his time, and shot Dickinson square in the chest, killing him with the bullet.  The bullet left in Jackson's chest, was so close to his heart that it could not be removed with surgery, thus he kept it in his body for the remainder of his life.  Very quickly, let us examine the numerology of Dickinson.
Andrew Jackson, as history has it, was one lucky son of a bitch, who had multiple close calls with death, and the number forty-four, the number of assassination.  Wouldn't you say?  Also, what better name for an assassin, than one with a numerology of 44?