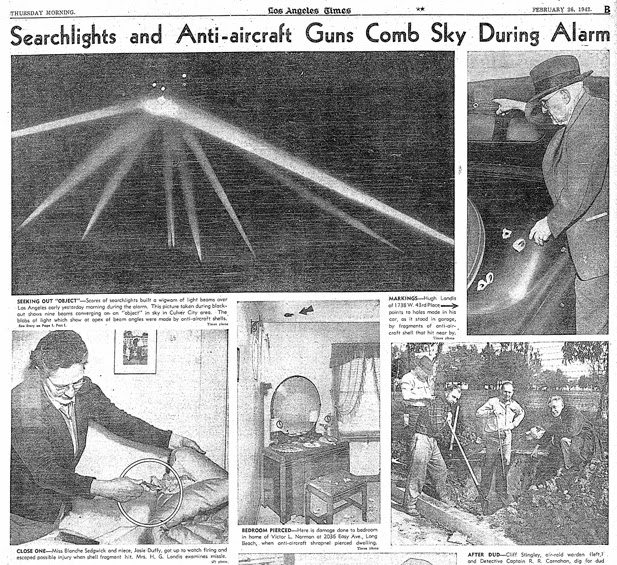 This morning I woke up to a nightmare that something bad had happened in the world on my birthday.  My birthday is July 21 or 7/21.  Today at work, my buddy texted me, "It's the 72-year anniversary of the Battle of Los Angeles, and it is had a weird number thing."  So tonight, getting home from work, I'm checking it out.  Keep this in mind for you read going ahead.

It was February 25, 1942, just three months after the U.S. becoming involved in World War II.  In the late hours of February 24, the U.S. Navy shelled the skies of Los Angeles in a spectacle they later ruled a false alarm.  It was Frank Knox who informed the public of the mistake, which at first was thought to be a Japanese attack he explained.
Throughout the entire ordeal, Air Raid sirens were roaring through all of Los Angles County.  At 2:25 am, on 2/25, a blackout was ordered for Los Angeles County.  By the time the ordeal was over, 1,400 Navy artillery shells had been fired and countless .50 caliber machine gun rounds.  At 4:14 in the morning, the firing commenced.  The blackout was lifted at 7:21 am.

Isn't that strange?
Posted by Zachary K. Hubbard at 6:33 PM