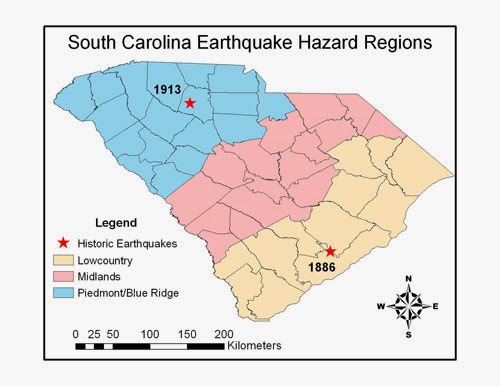 The week of February 10-14 was quite unusual for the State.  Within as many days they had weather ranging from over seventy degrees Fahrenheit to snow, as well as an earthquake with an epicenter near Augusta, South Carolina, which is located directly on the thirty-third parallel.  The earthquake was initially reported as a 4.4, but has since been downgraded to a 4.1.  It was felt from Atlanta to Southern Virginia.  The last time the region had a similar earthquake, was November 11, 2002, when a 4.4 magnitude earthquake struck the thirty-third parallel again, near Seabrook Island.

If you've never read the first blog on this post, it is about why I suspect the next 9/11, whatever that may be, will take place in the Georgia, South Carolina, North Carolina region.  Hopefully I'm wrong about that theory, and this week for South Carolina wasn't foreshadowing of anything worse to come.  If you'd like to read that original post, it can be found here.