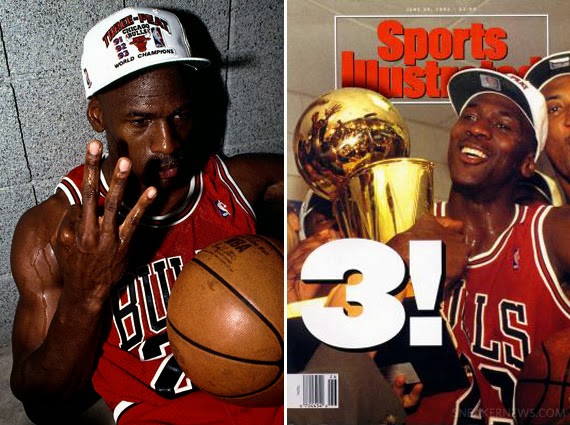 In 1984, the Chicago Bulls drafted Michael Jordan from North Carolina University.  In the 1991, 1992 and 1993 NBA seasons, Michael Jordan would win three championships in a row, and earn the title of "Three-peat".  Let us examine the numerology of Bulls in light of the term 'three-peat'.
Chicago, home of the Bulls, is also home of the 60606 area code.
Keep that in mind, for the theory I propose later in this post about the number bridging 33 and 13.  With regards to 33, Michael Jordan was the star player of the Chicago Bulls and the NBA for much of his playing career.  His name also has 33 numerology.
Michael Jordan was often referred to as "MJ".  M is the thirteenth letter, and J is the tenth.  The two letter combined, = 23.
In the time Michael Jordan was the biggest basketball star in the world, Michael Jackson was the biggest music star, Michael Douglas was one of the biggest movie stars, Michael J. Fox as well.  In boxing, Michael Tyson, or Mike Tyson, was one of the most dominant boxers around.  Everywhere you looked, it seem there was a star Michael.  Remember, Michael equals thirty-three, and this world's media and information sources are controlled by people who worship this number.  In other words, they want to put their number everywhere, whether you consciously realize it or not.  That isn't to say these Michaels don't have talent.  It is to say that these Michaels might have gotten to where they were because of their names.

Let us take a look at Michael Jordan's three championships that he won, and how all three are directly related to the number thirty-three, something that seems to go far beyond coincidence.

In 1991, Michael Jordan defeated the Los Angeles Lakers, lead by star Magic Johnson.  Los Angeles is located on the 34th Parallel North (and sprawls well into the 33rd), and was lead by star Magic Johnson, who has a name also equaling 33.
Magic John would soon after have to retire from basketball due to complications from HIV and HCV.
That might seem like a coincidence, until you realize Michael Jordan won his second championship, this time against the Portland Trailblazers, located in the 33rd state, Oregon.  Then in 1993, Michael Jordan would defeat the Phoenix Suns, a city also located directly on the 33rd Parallel North, completing the "Three-Peat".  The only other NBA teams with thirty-three association are the Boston Celtics, and the Atlanta, Hawks.
Ask yourself, can it all be a coincidence?  As a kid, I thought it seemed Michael Jordan got away with fouls, traveling, and everything else.  As an adult, who learned about the number 33, Michael Jordan restrikes my curiosity... To close with a strange fact from my life, I grew up in Portland, Oregon and always wanted to be a professional basketball player as a child, mostly because I was a big fan of the Portland Trailblazers.  After the Bulls defeated the Blazers in the 1992 NBA Championship, I became a big critic of Michael Jordan, because I felt he got away with fouls, traveling, and everything else, while I also getting unjustified calls in his favor and quite often.

It seems this thirty-three thing might indicate the truth.  Today, Michael Jordan is the owner of Jordan Brand, and involved with marketing for several major companies; from cars, to underwear, to sports nutrition.  He is also a part owner of the Charlotte, Bobcats, the team that is located in the second richest city in the United States, only behind New York City.  This is because Charlotte is where all the major banks of the United States are headquartered.
If you want to know who Michael Jordan's real bosses are, look behind the curtain.  Because of his talent, he was chosen.  Perhaps also because of his name, Michael.
This season the Portland Trailblazers changed their arena name to the Moda Center.
With regards to 23 bridging the numbers 13 and 33, I propose that because in the research I've been doing, the number 23 often up.  Being an amateur at this, I do not know what it means, but I realize it is the number directly between 13 and 33, numbers that seem to be important to the shadow government, Illuminati, powers that be, or whatever you want to call them.  Michael Jordan wore that number, and had initials that equaled it.  Again, is it all a coincidence?
Posted by Zachary K. Hubbard at 1:07 PM