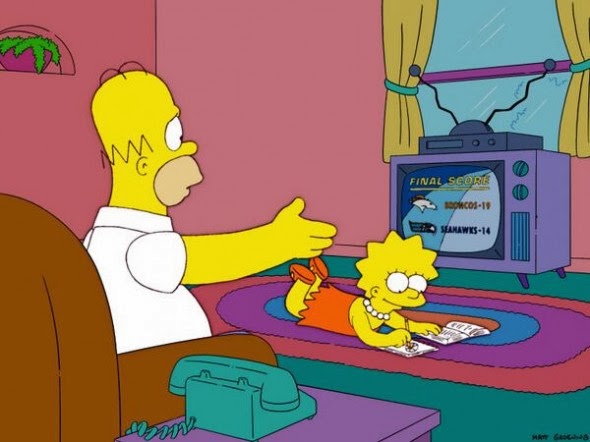 In the debut episode of the Simpson's seventeenth season, on September 11, 2005, the show predicts the Denver Broncos defeat the Seattle Seahawks by a score of Denver 19, Seattle 14.  What is the sum of 19 and 14?  Answer:  33.  This Super Bowl will be the first to be played on February 2, the 33rd day of the year.  It will also be the first Super Bowl to be played by the two states that legalized marijuana, giving it the nickname, the Up in Smoke Bowl.

What is key to me is the number 14 next to the Seahawks, in the Super Bowl that will be played on the 33rd day of the year, in 2014, or '14.  The Seahawks happen to be the only team in the NFL with a Gematria of "33".  I fully suspect a secure with by the Seattle Seahawks over the Denver Broncos.  Keep in mind that in the episode, Homer bet wrong and lost a significant amount of money; currently Vegas has most famous thinking the Broncos are going to win.
The episode is titled "Bonfire of the Manatees" and is the 357th episode in the history of the series.  It has a plot description as follows: After Homer gets into trouble over his football gambling debts, he allows the Springfield Mafia to shoot a porno film (euphemistically called a "snuggle film") in the house without Marge's permission. When she and the kids return home from a trip to "Santa's Village" and find production still going on, a furious Marge leaves for the beach--and encounters a marine biologist named Caleb Thorn who has dedicated his life to saving manatees.

In recent news, a "Super Bowl prostitution ring" has been busted.  That isn't too far removed from Homer's porno film shenanigans.  In more historic news, the Simpsons have a history of predicting future events, including the September 11 attacks on the World Trade Center buildings.  In the ninth season of the Simpson's, episode 179, which debuted on September 27, 1997, The City of New York vs. Homer Simpson, Bart Simpson holds up a magazine cover that seems awfully suspect in hindsight.  In that same episode, there are also references made to the Pentagon in Washington D.C., despite the episode taking place in New York City.  This is not unlike the Iron Man cartoon that depicts a villain destroying the World Trade Centers and the Pentagon within the same episode. 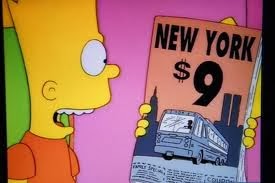 With that picture in mind from the 1997 episode of the Simpsons, let us not take so lightly the September 11, 2005 Simpson's prediction of Broncos 19, Seahawks 14, and the sum of 33 in a Super Bowl that will be played on the 33rd day of the year.  After all, we are talking about a league where the Patriots became elite after the September 11 attacks, and the New Orleans Saints went from bottom dweller to Super Bowl contender after Katrina, winning the Super Bowl four years later.  Looking at it with open eyes, the NFL truly does seem to be a scripted league.