Darwin and Christianity: 33 and 33 | Was Darwin Crucified? 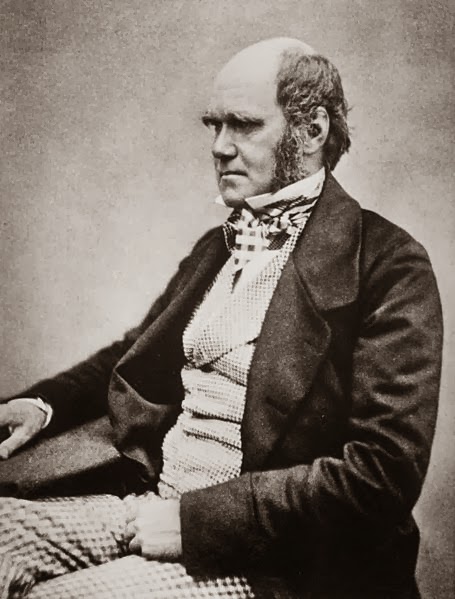 Charles Darwin not only has a name that equates to 333 in numerology, he also has a date of death that equals 33, and a birthday that equals 23, another number with magical properties in some belief systems.
Charles Darwin is considered to be the father of the theory of evolution, or at least a major contributor.  On November 24, 1859, twenty-two years before his death, he published the book Origin of Species.  By the year 1870, the majority of the Western scientific community and much of the Western public had accepted evolution as fact.  It wouldn't be until the 1930s however that natural selection would be determined as the mechanism behind evolution.  Very quickly, let us look at the numerology of the release date for Origin of Species.
Charles Darwin was born to a wealthy, well educated family, in a home that was referred to as "The Mount".  He was born in Shrewsbury, Shropshire, England.  His parents were of mixed spiritual beliefs, with a Unitarian background.

For Darwin's undergraduate degree, he attended Cambridge.
While at Cambridge, his cousin William Darwin Fox introduced him to beetle collecting and study, planting the seeds of the future research he would undertake and theories he would soon create.  Let us quickly also look at the numerology of William Darwin Fox.
Interestingly, the number 34 is associated with Satan, from the story of Dante, 33 is associated with Jesus Christ and God from the Bible, as well as the master teacher from scientology, and has connections to just about every other form of spirituality, and 666 is the number that is said to be the calculation of the beast.  Talk about a complete name!  This person, William Darwin Fox, is said to have planted the seeds in Charles Darwin's head for what he would later go on to do.  As we all know, the findings of Darwin have been to the dismay of many people of the Christian faith, and a battle between Christianity and Darwinism, or Creationism and Evolution, has been underway ever since.  If you've ever read about the Illuminati, one of their goals is to destroy spirituality in the world, and convert people to Satanism.  If you're not familiar with Satanism, it isn't devil worship- instead it is self worship.  Now ask yourself, how many people do you know that act like they're the center of the universe and would be guilty of the charge of "self worship"?  Personally, that describes many people I know, and by watching the way most people behave in traffic and in their cars, it adds more evidence to the accusation.

What I'm left wondering is if Charles Darwin is even a real person, or a person who took on a false name and helped spread the gospel of the Illuminati.  While I don't disagree with evolution as a theory, I am aware that there are credible arguments within the scientific community that it is not a complete theory and has many holes within it.  Despite this truth, it is taught as gospel in public schools across the nation, which I am 100% sure are more about socializing students than educating and empowering them.  While evolution is interesting and has roots, so do other things that are completely left out of school such as sacred geometry, which there is even more proof of than evolution itself.  Sadly, most people aren't even aware of what sacred geometry is, even though it is present in all natural things around them, including their own bodies.

Ask yourself, who sold you evolution, but kept sacred geometry a secret from you?  I'll tell you who; these same people who worship and work around the number 33 and other important numerology (to close we will look in greater detail at the publishing date of Origin of Species, a date that has much numerological significance in common with important dates and numbers in our history).  These people that put out the information that becomes mainstream knowledge, they're controlling us, and they're centralized, and they're in what they're in for power and wealth, AT THE EXPENSE OF ALL THINGS DECENT.

That is why for hundreds of years we have lived with war and the savagery of war when we live in an age where we could have a universal utopia because of scientific advancement.  Instead, the powers that be choose otherwise.  It isn't lunacy, it is reality.  If the powers wanted to make the world peaceful, they would on the date they wanted it so- just as they did to end World War I, which came to a close on November 11, at the 11th hour of the day.  For years after, November 11 was known as Armistice Day, the day of peace.  In more recent years, it has become Veteran's Day, and a celebration of the soldier.  The point is, these powers that be, this shadow government, they could chose to rule us with renewable energy instead of war and oil by making you work twelve hours a day, seven days a week, doing all things renewable.  But they choose not to because the game is a psychological game, like Michael Douglas must go through in the movie The Game, a movie that is known for escaping meaning to a lot of people.

These  same people who give us these movies, they are the same people who are at war with every nation on the 33rd parallel, and the same people who control your life.  They're negatively impacting this whole world, and everyone of us just to maintain their power and bring about their agenda, what the elite sometimes refer to as the New World Order.  If you think these thoughts are far out, you better ask why is that so?  Why are they so far out?  If you still think they're far out, then you better start reflecting on your own government, and this world, and ask yourself for how much longer are you going to tolerate people starving to death needlessly, wars raging needlessly, etc. etc.  Better yet, why is our country building pipelines across the country to extract natural gas and tar sands oil, and shipping it to the Gulf for foreign export?  Think about that.  We're so far down the road with oil, we're even giving up our own nation for the dollars and cents of the TarSands XL Pipeline for Exxon, and all the other biggest billion dollar profiting companies of the world; almost all of which are in oil, banking and lending.  In the end, we'll see that we gave up this world to madmen for nothing in return but misery... that we thought we deserved because of worthless paper money we used to survive and then fulfill our lives.  We, the people, are looked at as their puppets on their strings, living the way they want us to live, and behaving as they want us to behave.  That is why they put all seeing eyes on the money, gloating over us.  That is why all they want from us is for us to fly our flags, shut our mouths, work hard, go to school, don't complain, just do it.  Moving on.  And of course, believe everything Darwin said is true and life is all about natural selection and survival of the fittest.  While it could be true, it does not seem to be the whole truth, which is what we need.  Perhaps there is more to the story?  Of course, there is.  Please see the sacred geometry video below.