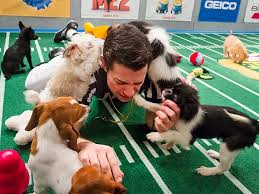 In this year's Puppy Bowl that will take place from 3 EST to 5 EST, 66 puppies, twelve to eighteen weeks in age, will take the field in the tenth iteration of the Puppy Bowl; a much cuter spectacle than the Super Bowl that will be happening at the same time.  Why 66 puppies you might be asking?  At this time I cannot find this information, but I imagine it has something to do with the NFL launching in the year 1966, or '66.  Perhaps the puppies are a tribute to that.

Also in this year's Puppy Bowl will be 33 other animals, consisting of 3 guinea pigs and 30 cats, which at halftime, will perform the "Kitty Domino Topple".  Why 33?  Again, I cannot say for sure and am unable to find the answer.  At the same time, it might have to do with the game being played on the 33rd day of the year, February 2, 2014.  Or perhaps it is because it is half the number of puppies performing.

If you would like to read more about the Puppy Bowl, CNN has an article with "66 reasons to tune in" which you can read right here.
Posted by Zachary K. Hubbard at 9:25 AM