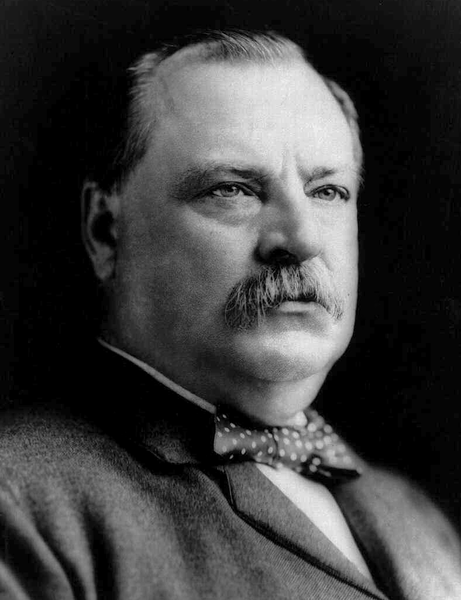 President Stephen Grover Cleveland was born March 18, 1837; and would become the first and only person to be President for two separate terms; making him the twenty-second (1885-89) and twenty-fourth (1893-97) President.  President Cleveland was also the winner of the popular vote in 1888, but lost to Benjamin Harrison due to the electoral college.  President Cleveland was also only one of two Democratic Presidents during the Republican dominated era.
While President, Cleveland developed the term "Mugwump" to describe Republicans who embodied his values.  Let us look at the numerology of the word Mugwump.
At the beginning of Cleveland's second term, an economic disaster struck the nation and was later called the 'Panic of 1893'.  As fallout from the economic collapse, the Democratic Party was nearly destroyed, and the outcome gave way to the "Republican Landslide of 1894".  The ultimate outcome of the Democratic fallout was the beginning of the "Progressive Era".

President Cleveland is also one of four former New York Governor's to become President of the United States.  Those men in his company are Martin Van Buren, Theodore Roosevelt and Franklin D. Roosevelt.

Stephen Cleveland is also further evidence of the conspiracy of 33, regarding qualifications for becoming the President of the United States.  It seems that in someway, a person must be affiliate with the number thirty-three if they are to become the occupier of the highest office in the land.

The Cleveland family, likes the Kennedy family, originates from Suffolk, England, and Massachusetts.
Also, President Cleveland was a former Governor of New York, where the first governor of the states was Governor Clinton.  Of further importance, New York city was established on February 2, the 33rd day of the year.  Its original name however, was New Amsterdam.